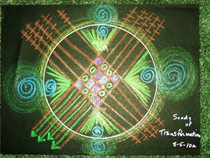 Emotional Freedom Technique (EFT) is a quick and easy energy medicine technique for letting go of negative beliefs and installing positive ones.  Developed for psychological use from the Chinese accupuncture system, it helps clients get “unstuck” from habitual patterns of thinking, feeling and behavior.  EFT is remarkably simple and effective, especially when practiced daily.  It can be learned and applied in minutes, and results are immediately recognizable.

The following is excerpted directly from “What is EFT” by Gary Craig, creator of Emotional Freedom Technique (http://www.emofree.com/)

Emotional Freedom Technique breathes fresh air into the emotional therapy process by borrowing from the Chinese meridian system . . .  a complex system of energy circuits that run throughout the body. These energy circuits . . . or meridians as they are called ... are the centerpiece of Eastern health practices and form the basis for modern day acupuncture, acupressure and a wide variety of other healing techniques . . . .

EFT is an emotional version of acupuncture, except we don't use needles. Instead, we use a simple two pronged process wherein we (1) mentally "tune in" to specific issues while (2) stimulating certain meridian points on the body by tapping on them with our fingertips. . . .  As guilt, anger, fear, trauma and the like become resolved, physical ailments often subside simultaneously.

EFT's foundation comes from a common sense blend of Acupuncture and Mind-Body Medicine, both of which have decades of scientific studies supporting them. Their effectiveness has been so profound that prestigious institutions such as Stanford, Harvard and many other universities, clinics and hospitals have chosen to use and/or study them.

The mechanism of EFT [is called] The Discovery Statement and can be elegantly stated in one sentence:  “The cause of all negative emotions is a disruption in the body’s energy system.”  Another version of the Discovery Statement says:  "EFT can assist physical healing by resolving underlying energetic or emotional contributors."

There is relatively little emotional suffering involved with EFT. It is comparatively painless. . .

You will be asked to briefly recall your problem (there may be some discomfort in that), but that is all. There is no need to relive the pain. In fact, with EFT, generating prolonged emotional discomfort is frowned upon. This is but one example of where EFT is a radical departure from conventional methods.

See http://www.emofree.com/ for a wealth of further information.﻿

What you seek is seeking you.

The darkness lifts, imagine, in your lifetime.

...the key is turned.  Extend yourself--

everywhere you turn is luck.